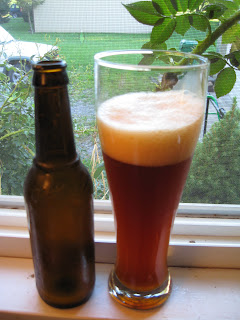 So I brewed ten gallons of this stuff about 5 months back. It primaried in a massive 15 gallon hdpe barrel and I bottled it all with the help of Abrial- with whom sanitizing and filling became a joy. (perhaps it was just nice to have help for once.

Note: The bitterness is there( which I like because this beer is quite malty) but I should have dry hopped it for a few days as well.

Yeast: I used US-05. Its a good all around yeast that ferments out pretty clean.

Single Infusion to mash at 153 for 60 minutes


Appearance: The beer pours a nice red amber color with about three fingers of foamy head that dissipates within a few minutes. Carbonation is a bit over where I want it, my fault as I primed with a bit too much dextrose. As long as you pour immediately after opening and into a large enough glass its not an issue.

Taste: This is one of the better mainstream style beers I have made. Usually I tend toward the saison and Belgian direction but this is great on a hot summer night. Its malty and crisp with enough backbone to balance out the large hop additions. Its very drinkable and the carbonation plays nicely with fuller body.

Nose: nice smell of cascades, malty and somewhat yeasty- yeasty in a good way but I would prefer it without, probably because I didn't cold crash this one. It was before I had the ability to coldcrash- before acquiring a freezer and a fridge for "extra food". I think willow saw right through that ploy.

I have about 1.5 cases of this stuff left, and while I wait to get all the parts for my keezer I will be milking the bottled beer I have and letting some of the bigger beers I made age out - many of them still have that high alcohol rocket fuel taste that big beers have for the first few months.

On that note I think I need to make some smaller beers soon.