It really is quite fun to say: hugulkultur - its a fancy way of saying a raised garden bed that is made by putting down dead wood- preferably rotten - covering it with upside down sod, leaves, dead grass, compost and a layer of topsoil.

Pennsylvania has nice spring and fall seasons- winter is grey and cold with little snow and summers start off nice and end up with arid desert like conditions. This is what brought me to this idea. Hugelkultur is a type of permaculture bed design that provides massive amounts of nutrients and water in times of drought and dry weather. The wood breaks down releasing nutrients to the plants and it absorbs massive amounts of water during rainy periods which is released back into the soil when the plants need it most.

So since I had some beds that dried out really quickly I decided to create my own version of this gardening style. I started by digging out the beds and throwing the topsoil and other stuff onto a tarp in a path. I stopped digging when I was tired of digging...which didn't take very long. Then I put down a few logs, branches, and sticks I had lying about and a thick layer of maple wood chips that had a large population of angry ants. On top of that went another thick layer of mushroom mulch and on top of that will go the top soil I removed. 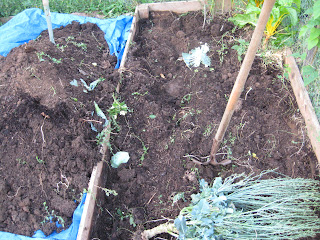 Here you can see that about 2/3 of the way through the digging I decided to pull some old broccoli and add it to the mix. At this point I raked it all out then started adding layers of wood 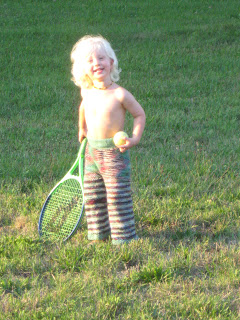 Finn decided he wanted to hit tennis balls at me. 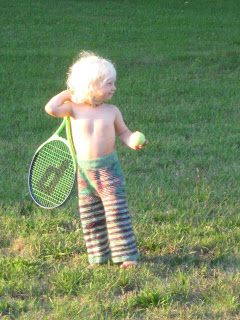 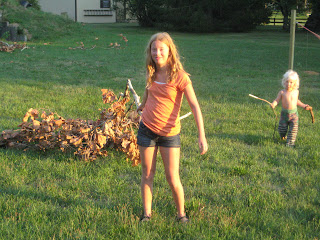 Finn and Abrial dragging some branches that fell during our last wind storm. In the second picture I think Finn looks as if he is driving a mule. 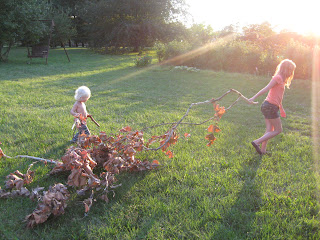 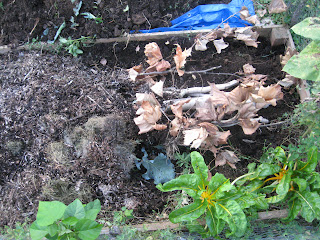 It's messy and there are some Swiss Chard plants that I allowed to live but the bed is taking shape. I covered the wood scraps with wood chips then covered that with mushroom mulch. Tonight after the temperature goes down this evening I am going to cover it with the top soil I removed and give the entire thing a healthy soaking. Hugelkultur beds are supposed to be mounds, but mine is more of a somewhat rounded pile. I hope it works as I really miss having greens and I bet garlic would do great in this kind of bed.

When we started out gardening we build eight 4x8 foot beds out of rough hewn hemlock and filled them with turned sod and mushroom compost. They tend to dry out quickly but we have tried amending them with grass clippings, leaves, and other compost. This is my attempt to see if hugelkultur is something that could work on a large scale and work for us when we put in a more permanent garden.