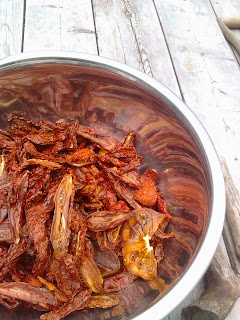 This bowl full of dehydrated tomatoes is our attempt at introducing summer to crisp autumn days and cold winter nights. Will eating these bring back summer? No more so than downing a few strong beers makes me a better dancer...well it might but pictures of that could well lead to divorce.  What these beauties will do is add a sweet tangy flavor to pasta sauces, pizza, and out of season caprese salads.  They will help avoid the bland store bought dried tomatoes covered in chemicals and give us an excuse to plant more tomatoes next spring.

These Roma and Kellogs Breakfast tomatoes were sweet and juicy when they were picked and it took about 10 hours in the dehydrator to turn them into leathery tomato goodness. The price for these in the store is pretty high, and while what you get might satisfy your needs they are nothing like what you can make yourself.  Ignoring the amount of work that goes into planting and maintaining a garden, or more likely trying your best to erase from memory long days of tilling and planting, its a slightly cheaper option but a far more fulfilling one.

Prep Work:
To prepare the tomatoes cut them into either thick slices( I did 1/2 inch slices when using tomatoes other than romas) for paste type tomatoes like Romas I just cut them lengthwise in half. Place on dehydrator drying racks so that none of the slices are touching each other. Dehydrate for 6 to 12 hours at 140 degrees F or until tomatoes feel like leather but can still be bent without them cracking.

Using a pressure cooker or canning pot sanitize your pint jars, remove to a cutting board to await filling.

Remove your now wonderfully dried tomatoes from your dehydrator and set aside. Grab a medium sized sauce pot and turn the heat on high. Add your white vinegar and wait for it to boil. The idea here is that you are hitting your soon to be canned sun dried tomatoes with the first two of three anti microbial/anti-fungal steps. when the vinegar reaches a boil start giving small batches of your tomatoes a quick dip.  just a few seconds in the boiling vinegar is all you need, to long and the tomatoes will start to absorb too much of the liquid. Pull your tomatoes out of the vinegar, I found using a spider skimmer worked well to get them out quickly. place your tomatoes into a bowl and continue immersing and removing the remaining tomatoes until all have been treated in the vinegar solution.

Place 1 clove of garlic in each pint jar and then stuff as many of the dried tomatoes into the jars as you can. I left about an inch of head space in each of the jars so I had room to get all the air pockets out later on. Now add the olive oil to the jars very slowly. The oil will get into the nooks and crannies pretty well but you will have to shift the tomatoes around either with a fancy canning tool or with a butter knife- my weapon of choice. Work the tomatoes around until no more bubbles float up then top up the jar with oil until there is about 1/2 and inch of air between the oil and the top.  Continue in this way until you run out of jars or tomatoes. Next place the lids and rings on your jars and tighten the rings until the are just barely snug on the jar. Place in your canning pot and bring to a boil. Boil for 30 minutes then remove and wait for that delightfully satisfying pop as your jars seal and all your hard work is done. 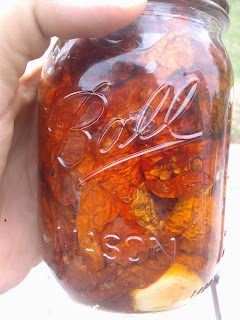 Allow the jars to sit for at least 24 hours to make sure the lids have seated properly then store somewhere until your curiosity gets the better of you and you have to open them. Just don't eat them all with a fork while murmuring the word precious and hissing at anyone who tries to take them from you.