So I bought a surplus of apple juice at a local bent and dent and set about making a prodigious amount of booze from it.

5 gallons of anything sounds like an awful lot but really that only fills about 2 cases of beer bottles plus a few more. So out of a 5 gallon batch of anything I get around 54 twelve ounce bottles of home made hooch.

Two cases of carbonated beverage - or one 5 gallon keg - doesn't necessarily last two adults very long. Especially if those adults happen to have 5 wonderful children. In that case 5 gallons isn't nearly enough.
Here is the link to the original recipe and a lot of discussion on it.

This batch is an experiment. If you look for Apfelwein you will find a long series of posts dedicated to it on homebrewtalk.com, the recipe came from a guy calling himself EdWort. This stuff is great. Willow loves it because it sits happily around 10% alcohol and takes about 1 glass to give a healthy warming feeling. More than that and its a speedtrain to giggletown. I like it carbonated but I did cork 24 wine bottles worth of the stuff about three months ago. One bottle is left and that has been promised to a currently pregnant woman who wants to drink it when she becomes unpregnant in a few weeks.

My adulteration of EdWort's recipe is as follows:

2 pounds Dextrose
3.5 gallons Apple juice - only other additives allowed are Vitamin C as it doesn't interfere with fermentation
1.5 gallons Grape juice with only Vitamin C added - I used welches and juicy juice
Yeast: I used champagne yeast because its what I had on hand

The carboy on the right is the Grapfelwein, on the left is the straight laced apfelwein. 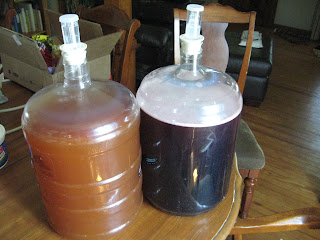 We tend to drink ours young, I shoot for waiting at least 3 months but I hear that waiting longer is better.
Posted by Ian at 9:54 AM