So I whipped up a quick mead last night. 5 gallons of great smelling booze that should end up between 10 and 12 % alcohol. It will be a doombringer that tastes like liquid satin.

I dissolved the honey in 130 degree water and added the stick and ground cinnamon and allspice. I allowed it to steep for 20 minutes before racking into a carboy leaving the cinnamon stick and allspice berries behind.

Racked into carboy and added 4 vanilla beans and filled to 5 gallon mark with cool water.

Pitched starter of WLP720 and yeast nutrient and yeast energizer according to the directions on the bottle. 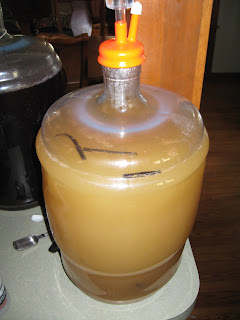 It should ferment out within a few months and in 6 months should be ready for drinking. maybe even before that. Mead usually takes a little while to clear out and for all the flavors to meld appropriately.

The carboy is shaped oddly because after a really long brew day- I think it was 1 AM, I didn't chill my wort and just poured into a carboy(rookie mistake), it mushroomed like this but it still works - just holds 5 gallons instead of 6.