The first build of my cider press did well for what it was; a somewhat poorly designed box frame with little structural support and a lack consideration of where the forces of a 4 ton bottle jack had to go. The lack of heavy lag bolts and strong supports led to cracking lumber and broken dreams.

The solution? Break it down and build it again.
Where is the failure in learning from your mistakes, what wrong is that?

The wrong in this case was not mine, at least not in the building or dismantling part.

Finn decided to help me as he often does when I venture outside to avoid schoolwork and house work. He was diligently picking up the discarded wood screws and placing them back into the screw box( often doing so quickly because the friction from removing them had caused them to glow with the heat of 2 suns). I paid him no mind when he started stacking lengths of lumber a few feet from me- just Finn being a kid and puttering about I thought.

Then  BAM! right in the brain box.
The sky grew brighter and pain welled up behind my eyes, I put my hand on my forehead to staunch what I thought was surely grey matter, set my jaw, and clenched my eyes tightly together to fend off the urge to tear up.

I want to say I was silent when this happened, stoic enough to take my punishment( for not wearing a helmet apparently), and simply walk it off. But I wasn't. I was weak, that or I hadn't been drinking enough to numb the pain. Bringing my hand down from my head I saw blood and the world heard my confused rage in the form of language that would make a sailor take notice.

Luckily I think Finn was shocked enough by what had happened that he didn't pick up anything,  or Willow would have keelhauled me.

After it was all over and I had an unnaturally blue icepack pushed against my forehead I could finally laugh about it, willow on the other hand had been laughing about it since I stumbled in to tell her what our little assault child had done to me. I guess I will be wearing my caving helmet whenever I work outside with Finn now.

so the failure here:
Finn cracked me in the head with a 2x4, there is a 1 inch gash in my forehead. I may have said something loudly that shouldn't be uttered in the presence of children and women. 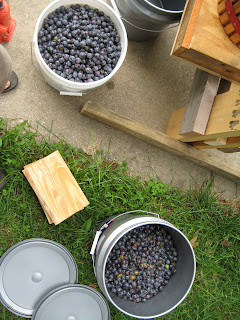 Before the press gave up the ghost I managed to get 3 gallons of good grape juice out of it, I sulfited it and put it in a bucket and will be making wine from it today i hope. The skins also got some sulfite and will be used to make a table/cooking wine. 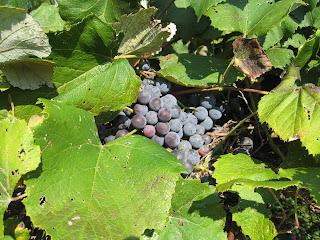 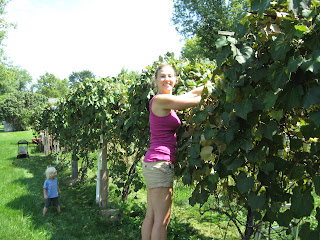 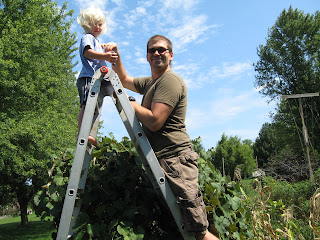 Finn and Willow helped me pick these earlier, it took only three hours to pick and destem 50 pounds of grapes- the picking i had help with( at times too much Finn help) - the destemming I had to do alone while I watched episodes of BrewingTV on my thinkpad.

Note: destemming grapes is a very boring and sticky business.

Success: The new press I build is one based heavily on things I found online. I should have just bought plans to build one, the videos i watched showed the press working great - mine required lots of tinkering and reinforcing as well as an entire day to complete. (the one I refer to is called a Whizbang Cider Press and is very well reviewed) I should have just bought the plans and saved myself lots of time and aggravation. In the end the press I ended up with( at least for now) seems to be able to take a lot of pressure and doesn't make too many unnerving creaking noises when I press stuff. I managed to do some apples from our trees last night and got a good 1/2 gallon of juice really quickly. I used an old pillowcase as a pressing bag- its a high thread count one from somewhere that we just didn't like. I worked really well - the juice was much clearer than the juice I made before, and despite the apples not being quite 100% ripe the juice was good and kid approved. 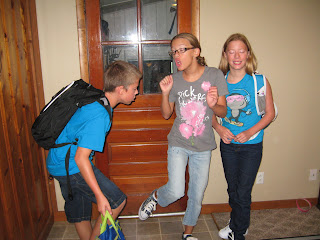 This might look like them getting home on the first day of school, but I assure you this is their "the cider meets our standards" dance celebration. really. Abrial is even so blinded by the deliciousness that she has to close her eyes.


Also: its painted the same color as our house - Thanks whoever left paint in our basement!