I brewed up a batch of Mead about 8 months ago, its was a straight mead with just honey and water, I didn't boil the mead and since it was my first attempt I kept poor records. The only thing I have written down goes something like this:

I know the age is around 8 months and I know it has fermented out because i took a refracotmeter reading(not really accurate at the end of fermentation). But tasting it it was dried out and pretty good. It tastes like it needs some more time to age out but I will do that in the bottle.

The point of this post is that the mead never cleared out. Never. Its been in a 33 degree fridge in the basement for over a month and is as cloudy as it was three months ago. So tonight I started the clearing process with a chitin based clarifier called Super-Kleer KC. Its a chitin( a shellfish derivative)  based clarifier that binds to the gunk(technical term) in the solution and drops it into the bottom of the fermenter. The instructions claim 24 to 48 hours will give you crystal clear results so we will see. The picture below is of the mead when I added the first part of the combination. 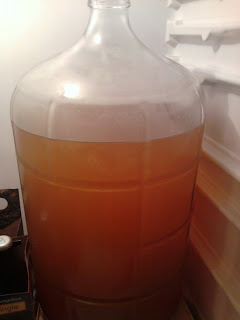 I think I will be bottling this in wine bottles and corking them, I was tempted to keg it and have it on tap but I don't think it has aged out enough and I need the fermenter for cider. I want to be able to check the bottles every few months or so until I know I have great simple mead.

Update: around 14 hours or so later the mead is really starting to clear, I will grab some photos tonight around the 24 hour mark and see where it has gotten to. Very impressed with the clearing agent so far.
Posted by Ian at 7:38 PM

Email ThisBlogThis!Share to TwitterShare to FacebookShare to Pinterest
Labels: Mead