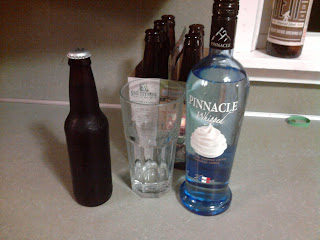 That's right, I am adding vodka to beer. So is Willow. The beer, an attempt at a Southern Tier Pum King Clone, clocked in at around 8% alcohol on its own, adding a shot of this makes it a powerhouse of a drink.
The taste is great, its like drinking a slice of pumpkin pie topped with whipped cream - I would like to say I came up with it myself but that distinction lies with someone who works at the Henlopin Oyster house in Rehoboth Beach.

Give it a shot, there are some great pumpkin beers out there and its a great excuse to try them!
Posted by Ian at 7:25 PM

Email ThisBlogThis!Share to TwitterShare to FacebookShare to Pinterest
Labels: Beer