Last of the extracts - found it in my beer tunnel 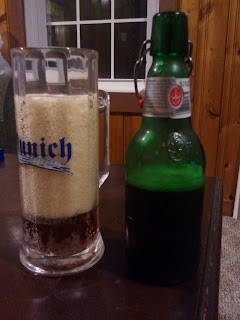 As you can see this is highly carbonated - I think I over-primed by about an ounce when I bottled almost 2 years ago.

the beer has aged pretty well, no signs of oxidation.

A little background on this beer.

It was a Phat tire clone recipe kit from Northern Brewer that I brewed the same night as I brewed a hefeweizen kit from them. I had two yeasts to pitch and wouldn't you know it I switched them. So I ended up with a brown hefeweizen and a lighter colored ale.

I thought I had gotten them all but this one survived my late night scroungings.

It has a fruity background, a caramel note to it and almost no hop aroma or flavor - I suppose two years of aging will do that.

Email ThisBlogThis!Share to TwitterShare to FacebookShare to Pinterest
Labels: Homebrewing